Trophies are pedestal-like blocks that can display the model of a mob. They come in three variants: Trophy, Gold Trophy and Ornate Trophy.

Trophies can be harvested without tools. When the player mines a trophy that is displaying the mob, the trophy block saves the mob it was displaying, and the mob's name is added to the trophy's name.

Trophies that display bosses are the only trophies obtainable in survival mode. Trophies that aren't displaying anything can be obtained in creative mode.

Trophies that display bosses can be obtained as a drop from all bosses in the mod. Each of the Four Guardians drops a trophy of themselves, while each member of the Primordial Five and the Immortals can drop trophies of themselves. Craexxeus and Xxeus each drop their own trophies as well.

The player cannot obtain a trophy that displays any other non-boss mob in survival mode.

A Gold Trophy displaying a Yeti.

A trophy's primary use is to display a mob model. The mob model will spin slowly in place above the pedestal. If the rotatingTrophies config option is set to false, the mob will not spin. 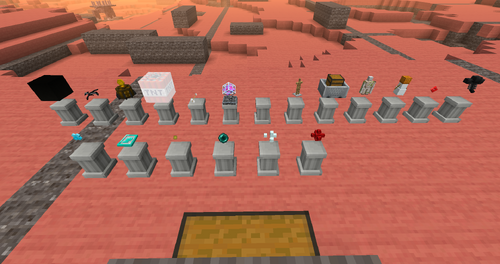 In survival mode, the only trophies that can be obtained normally are trophies that display bosses, and the gold variants of these trophies. Creative mode and data packs can be used to change a trophy's mob to be almost any, if not all, entities.

The trophy can be changed by using the desired mob's spawn egg on the trophy block. If a mob does not have a spawn egg, a trophy with the mob can still be obtained using a data pack.

If the player sets a trophy to a mob that does not exist, or to an entity with other issues (such as a lightning bolt), the trophy will transform into a trophy displaying an end crystal when placed.

Data packs can also be used to set a trophy's OriginalTrophy to allow the custom trophies to be usable to craft gold trophies.

9 trophies can be combined together in a crafting table to make a gold trophy as mentioned higher up on the page.