The Abyss is a bloody, gory dimension. 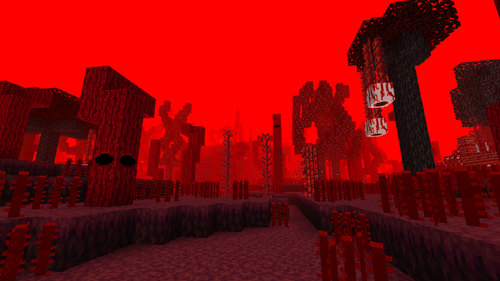 The Realmstone to this dimension can be obtained by spawning a Wither in the Nether while holding a Blank Realmstone.

The landscape of the Abyss is a combination of hills and flat areas. The underground of the dimension is made of abyssal stone, with a layer of abyssal grass on the surface. Dimensional Fabric exists at the bottom of the world. There is no dirt in the Abyss. The entirety of the dimension takes on a red color scheme.

The underground of the dimension is filled with caves. Bloodstone ore veins can be commonly found generating underground in the Abyss. Lakes filled with toxic blocks can be found deep underground, far below the surface, close to bedrock layer.

The surface of the Abyss is dotted with trees and gore-based plants and foliage.

There are currently 6 structures in the Abyss:

The Abyss Loot Table consists of the following items that can be dropped by all hostile mobs and bosses in the dimension (but not the NPCs):