Mysterium is a mysterious mushroom dimension. 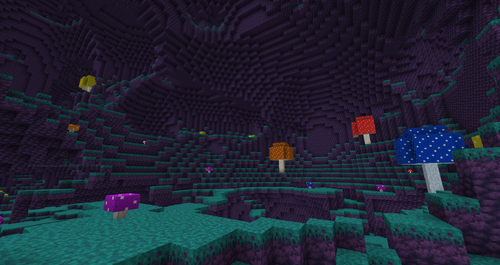 This dimension is unique as it takes place in the imagination of the Eeos that inhabit it.

The Mysterium dimension can be accessed by using a

Mysterium Realmstone on a portal structure. The realmstone to Mysterium can be obtained by poisoning a Creepird while a Blank Realmstone exists in the player's inventory. The Creepird must be poisoned with certain sources, such as a poison gun, normal poison potions won't work.

Mysterium has teal colored grass and has large colorful mushrooms for trees in it. The ground of Mysterium has many patches of blue plants, such as Mystic Ferns, and Rainbow Grass. The colors of mushrooms can vary from green, blue, yellow and purple. In addition to the large mushrooms, smaller mushrooms also can be found.

The structures unique to Mysterium are:

The Mysterium Loot Table consists of the following items that can be dropped by all hostile mobs and bosses in the dimension (but not the NPCs):