Lunalus is a dark, space-like dimension. 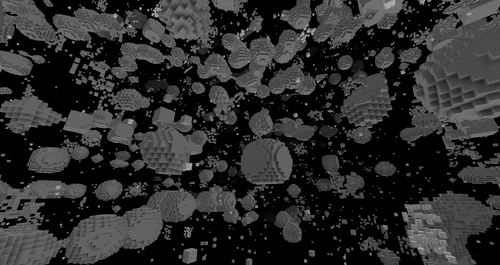 Lunalus is a dimension with floating pink moons, strange villagers, creepy mobs, and mysterious structures found throughout it. The Realmstone for Lunalus is obtained by jumping off the void of the haven with a Gravitator and surviving while the player has a Blank Realmstone in their inventory.

Lunalus' generation mainly consists of pink and blue planetoid- or asteroid-like masses. These masses generate within a specific y-range, and will never generate on top of one-another. The masses have trees and plants growing on top of them, which grant night vision when stepped on. Very rarely, Moonlight orbs can be found inside the blue masses, while Lunar orbs can rarely be found inside the pink ones.

There is a void at the bottom of Lunalus; the screenshots that show the bedrock and water bottom layer are outdated.

There are 10 hostile mobs in Lunalus. Out of those 10, 6 spawn in structures, and 6 are hunter mobs.

The Lunalus Loot Table consists of the following items that can be dropped by all hostile mobs and bosses in the dimension (but not the NPCs):