Lelyetia is a dimension with a forested upside and a nearly-identical underside.

Lelyetia is an orange forest world dimension with a unique twist: everything underground is upside down. The forests of the dimension are populated by the Lelyetians and many forest animals. Lelyetia is also home to some hunter mobs found locked away in dungeons. Overall, the forest is protected by a single guardian: Graw, who calls the forest his home.

The realmstone is obtained by falling 26 blocks or more while the player is holding a Blank Realmstone. If the player falls into water from this height, the task will not count. 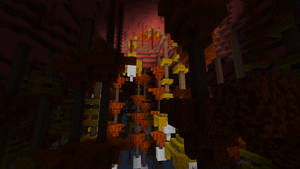 The underside of the Lelyetia.

Lelyetia has an orange color scheme. The dimension generates at y = 55 to y = 59, as a completely flat landmass made of Lelyetia Stone, with Lelyetia Grass on the top and bottom. Holes exist that lead to the underside. These holes vary in shapes and sizes.

On the surface, there is a forest consisting of tall trees and other foliage. There are two types of trees: Achony trees and Churry trees. The trees have tall trunks with rings of leaves evenly spaced up until the top. At the top of most trees, there is a small bush of Lelyetian Core. The surface also has various plants, some of them short while others grow quite tall.

The underside of the dimension is similar to the surface, except in that the trees and other foliage are all upside-down. Down here, gravity is inverted, meaning that the player will be rocketed back towards y = 55 to y = 59 (note that this only applies to players, mobs are entirely unaffected). Distorting Artifact will disable the inverted gravity.

The Lelyetia Loot Table consists of the following items that can be dropped by all hostile mobs and bosses in the dimension (but not the NPCs):

Other resources that can be obtained from Lelyetia are: