From Advent of Ascension Wiki
(Redirected from Iro Lamp)
Jump to: navigation, search

Most lighting blocks can be mined with a pickaxe. Ancient and Archaic Lights are unbreakable by all means. Fire Lamps and Iro Lamps are only available in creative mode.

The following lighting blocks can be found naturally:

Most of the lamps in the mod are used as a light source, building material and/or a decoration block. However, a few other lamps have different functions/purposes (see Usage section for details). 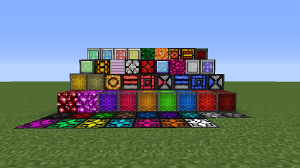 All of the lamps and light sources added by the mod up until Tslat 1.1.3/2.5 snapshot.

Lights are blocks that constantly emit light, regardless of if they are powered or not (such as Glowstone). All lights in the mod have a light level of 15.

Neon blocks are patterned, animated light sources. Most neon blocks are crafted with Lapis Lazuli or Redstone, with the exception of Runic Neon, which naturally generates in structures across Runandor.

All of these blocks have lamp functionality, meaning that they will not emit light and be inanimate when unpowered. Runic Neon has a separate "light" version in addition to its lamp version.

The Dustopian Lamp is a necessity for fighting the Primordial Five boss. The boss can only be fought if the Dustopian Lamps are arranged in a certain pattern. The lamps will turn themselves off when the boss spawns in.