The Illusion Tree is a massive tree structure that spawns in the Abyss. 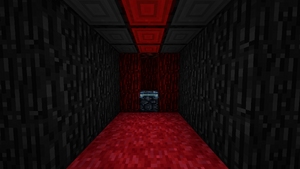 The inside of the Illusion Tree.

Illusion Trees are massive, tall structures in the shape of a tree. The tree is composed of both Shadow Wood and Blood Wood. The only leaves in the tree are at the top, the leaves in this case being Blood Leaves. The inside of the tree trunk is filled with Toxic Blocks. The bottom of the tree contains a small den with Illusion Altars inside.

The player is able to configure the generation rate of Illusion Trees in the mod's config file. By default the gen rate is set to 600.