The Guardian Tower[1][2] is a structure that spawns in the Haven.

Guardian Towers generate in the Haven. They will only generate on the islands (anywhere where there is Haven Grass).

They will only generate specifically in the Haven dimension. Guardian Towers will not generate in superflat worlds with the biome set to Haven. 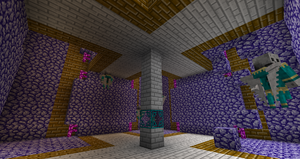 The first floor of a Guardian Tower structure. 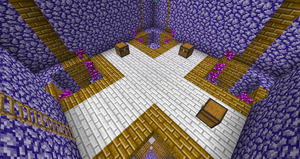 The topmost floor of a Guardian Tower structure before the roof. 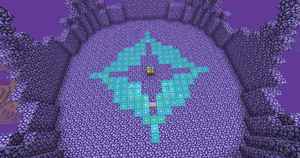 The roof of a Guardian Tower structure.

The entrance to the tower is at the bottom. Inside, there are multiple floors with staircases that lead up to higher floors. A majority of the floors are empty but some contain mob spawners in the center. These spawners will spawn either Angelicas, Seekers, Surveyors, or Volars. On the floor just before the very top, there are four chests. The chests are empty. There is also a ladder and trapdoor leading up the roof.

The roof of the tower consists of a balcony with a Guardian Altar in the center.

The Guardian Altar as seen ingame before version 3.0.

The following can be acquired from the mobs in this structure:

The player is able to configure the generation rate of Guardian Tower in the mod's config file. By default the gen rate is set to 35.