A dimension is a separate realm, with different mobs and topology. In Minecraft, dimensions can be accessed by creating and teleporting through the correct portal.

The mod adds an additional 22 dimensions to the game, accessible by Ancient Teleportation. Dimensions are tiered based on how far they are from the Overworld. 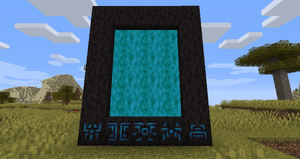 A portal to the Haven dimension.

The primary method for accessing all of the dimensions added by the mod is through a portal made of ancient rock and carved runes. This portal can be lit with a realmstone. See the Ancient Teleportation page for more information on how to build and light the portal.

There are a total of 5 dimensions added by the mod accessible from the Overworld directly; the rest require the player to visit other dimensions in order to get to them. 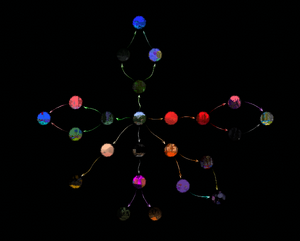 The order of the dimensions in the Blank Realmstone's GUI.

The mod adds 22 dimensions to the game. There is no order to the dimensions outside of having to travel through one dimension to get through another; the player can otherwise go to any dimension they want to in any order.

Tier 1 dimensions are all accessible from the Overworld.

Note: Runandor can be accessed by entering a portal in the Mysterium dimension.

The mod adds new content to the vanilla dimensions.

The mod adds 6 news ores, 3 new structures, and over 100 new mobs, bosses, and npcs to the Overworld, among other things. See the Overworld page for more information.

The mod adds 1 new ore and 2 new structures to the Nether, as well as various entities. See the Nether page for more information.

The mod adds new drops to the Ender Dragon, but otherwise does not add anything new to the End.