Creeper HQs are structures found on the surface of Creeponia that contain Creep Altars which can be used to summon the C.R.E.E.P. boss.

Creeper HQs have a 1 in 700 chance to generate in Creeponia. They will only generate if the following criteria is met:

Because of these conditions, Creeper HQs can only spawn on the surface. 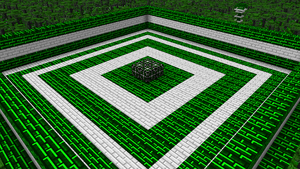 The top of the Creeper HQ.

Creeper HQs are tall tower structures, made of Creeponian Bricks and Whitewash Bricks. On the side of the tower is a creeper face made of Darkwash Bricks. The top of the tower is surrounded by walls and contains four Creep Altars at the center. The boss C.R.E.E.P. can be fought here by using an Explosive Gem on the Creep Altar.

The player is able to configure the generation rate of Creeper HQs in the mod's config file. By default the gen rate is set to 700.