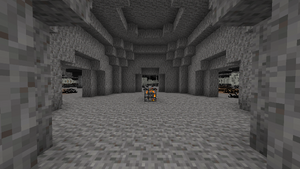 The inside of an Arocknid Cave.

Arocknid Caves are half-sphere structures made out of Deep Rock. In the center there is a Arocknid Spawner.

The player is able to configure the generation rate of Arocknid Caves in the mod's config file. By default the gen rate is set to 700.